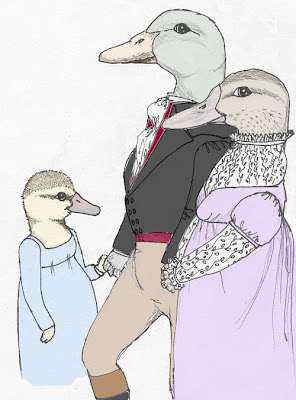 Guess what? It’s Friday. Weeee! Tomorrow is the Portland Vampire Masquerade Ball. I have about as much enthusiasm for a costumed event right now as I would feel for having my fingers gnawed off by rats… however, since my old school friend Kaia is going, I cannot NOT go. She lives in Seattle, and she is one of the very few people from my strange and bleak youth whose friendship was worth renewing. Ah the beauty of Facebook. I didn’t make a lot of school-friends in the DOD school days… so I value very much that Kaia hunted me down and made the effort to attend the 12th night supper on January 9th. Now she is on the hunt for corsets and tulle for this vampire thing. She even got teeth. I *may* get fake eyelashes… or not. ::shrug:: Meh.

I will recycle the costume I wore for the Transylvanian Ball last year; but likely do something different with my hair, I’m not sure. I'm not sure if my little blackbird will make a reappearance (yes, I stuck a fake raven in my hair). I will also have to figure out how to secure the evil falling skirts that caused the costume malfunction last time. I also need to bind the bottom of the corset because by the end of the night, the boning was falling out. I have to do all this before tomorrow evening.

I will post a pic or two if there are any worth posting. It’s a strange event full of really interesting people. I look forward to seeing some familiar faces in addition to Kaia, so it won’t be too bad I hope. 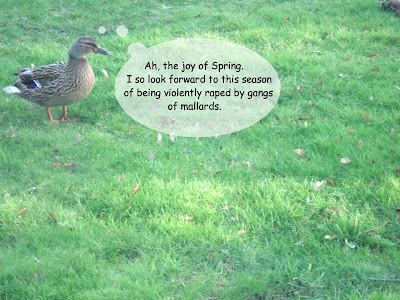 Anyway… They’re back again. The ducks have begun to return to the little food pile and blue bucket outside my window. I’ve been keeping it well supplied in order to encourage the lady duck to bring her brood of fuzzy babies when she does hatch them out. I don’t recall if we got any ducklings last year at all. 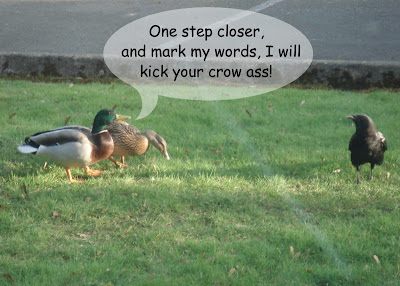 There hasn’t been a flurry of duck-violence as there has been in the past years… Mr. Mallard has only had to fend off the odd crow so far, and one other mallard that gave up very easily. Maybe there’s a glut of fertile, genetically superior duck babes for the boys to choose from this year.. I dunno. The spring of 2007 was Gang-rape-ville… seriously. One little she-duck had nearly a bare head from all the having all the feathers torn from it by the beaks of her attackers. Gangs of five or six mallards would take turns distracting her chosen mate while others attacked her. It was horrific. I am still emotionally scarred by that year; even though it did bring a bumper crop of moms and ducklings (which were subsequently hunted down to dwindling numbers by crows and various other predators… quite depressing). This is a yearly drama that I call “As the Creek Flows”. 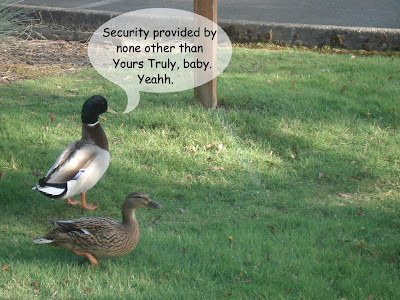 So naturally, today’s Friday Office Special is all about les canards. ;) Have a peachy weekend. 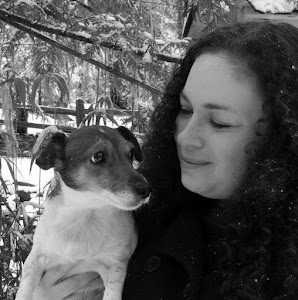